"Ode to Autumn" by John Keats 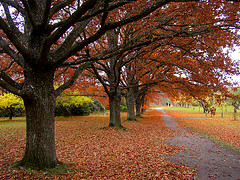 The poem:  Happy Thanksgiving! I won't have the chance to write much since I'm spending time with my family. I would like to say how thankful I am for my readers; I've enjoyed the comments you have left and the kind words others have written on other sites about my blog.

I chose this poem because it celebrates the beauty and bounty of the season. Keats was certainly not thinking of the holiday of Thanksgiving -- Keats was British and Thanksgiving wasn't even an official holiday in the United States at the time. However, the poem exemplifies the spirit of Thanksgiving, if unintentionally. Where most poets would admire the vibrancy of Spring and relegate Autumn to a metaphor of impending death, Keats sees inspiration in the present, luxuriating in the harvest and taking in the smells, tastes, sights and sounds of the season he is in, rather than wishing for another time.

The reader: With his BBC-quality British accent, the reader of Classic Poetry Aloud is the epitome of fine culture. His deep, mellow voice is soothing and rich, fitting the sensual qualities of the poem. He does an excellent job bringing the listener into the poem by varying his speed and pitch to convey the emotions of the poet, but he doesn't overdo his theatrics. Listening to a few other poems from the website, I find Classic Poetry Aloud to be a go-to resource for older poems.

photo by Per Ola Wiberg, Creative Commons by attribution license.
Posted by Sayeth at 8:00 AM

This blog publishes weekly reviews of free human-read audiobooks available on the web for download to your iPod or other portable music player. In my reviews, I try to avoid any spoilers beyond what you'd read on the cover of a paperback. Realizing that these books are being given away for free, I try to be not too harsh on the reader but still point out any aspects that may turn off some listeners.

I tend to prefer unabridged solo recordings, rather than reader-per-chapter or radio theater productions. I will not review any books or readers I dislike; there's just too much good stuff out there to be negative. Feel free to suggest any book, podcast or website in the comments.